This is hands down the best recipe for Cinnamon Rolls!

My friend Ronda from Asheville posted a comment about her friend Brundi’s amazing Cinnamon Rolls. Well, my hubby loves Cinnamon Rolls, and as much as I love the recipe I have, they take two days to make, so you better believe that I asked for the recipe. Thanks, Brundi and Ronda!

In a small bowl, dissolve yeast in warm water and set aside. In a large bowl, mix milk, sugar, melted butter, salt and egg. Add 2 cups of flour and mix until smooth. Add yeast mixture. Mix in remaining flour until dough is easy to handle. Knead dough on lightly floured surface for 5 full minutes. Place in well- greased large bowl. 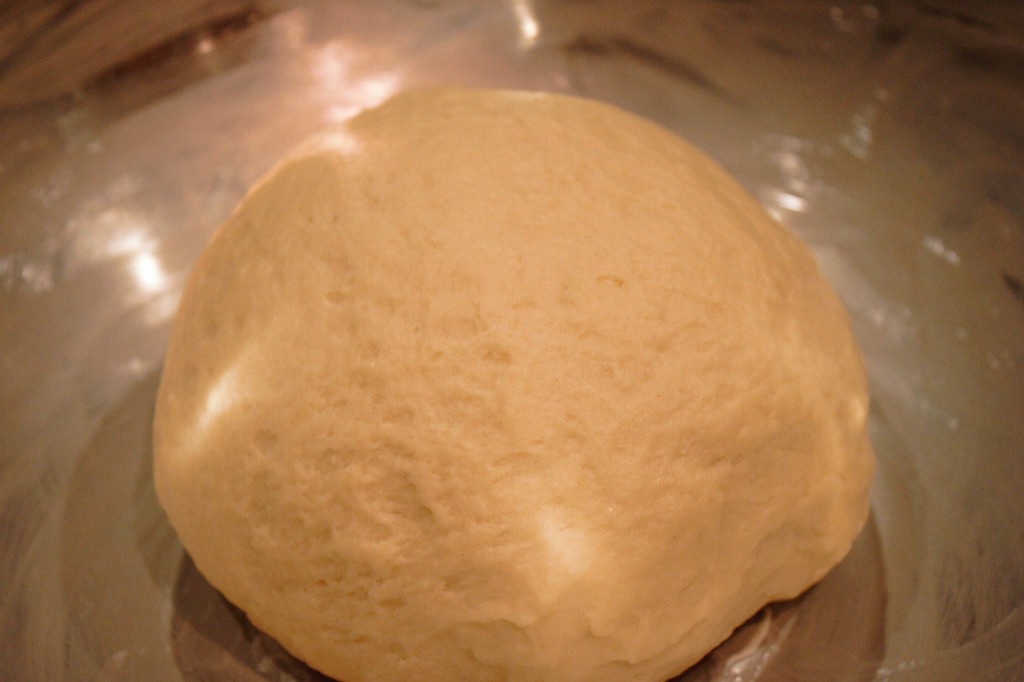 Cover with a dishtowel. I place mine in preheated 200 degree oven. When I am ready to put it in to rise, I turn the oven off. Let it sit in the oven for 1 to 1 1/2 hours. It is usually doubled in size and very smooth.

When dough has doubled in size, pull out of the oven and punch down the dough in the bowl. Roll it out on a floured surface into a 15 by 9 inch rectangle. 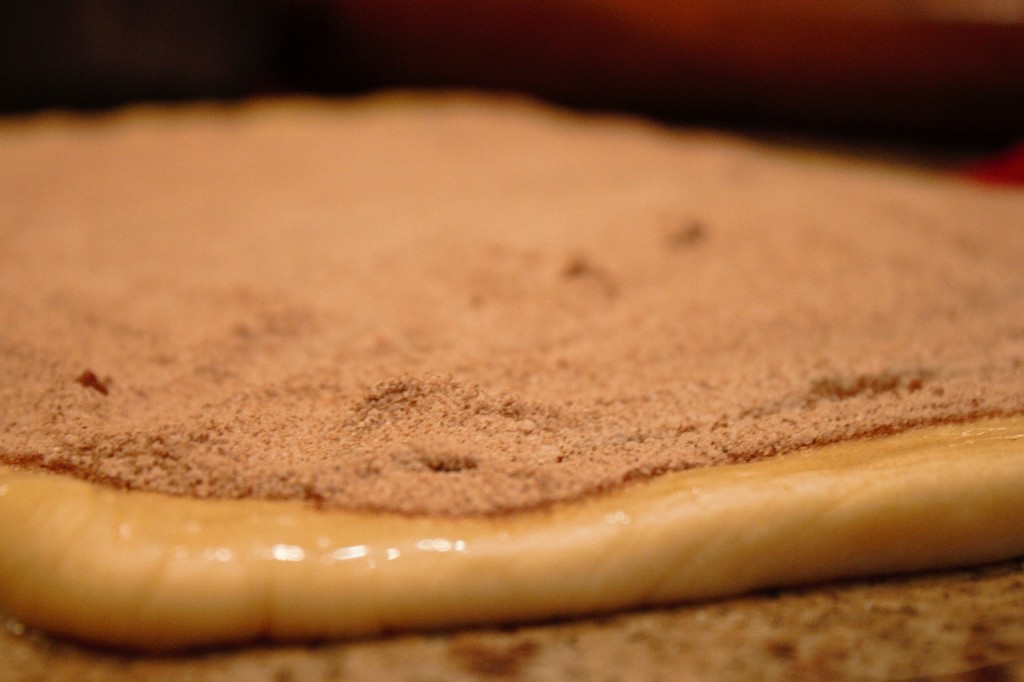 Spread melted butter all over dough with a pastry brush. Mix sugar and cinnamon and sprinkle over buttered dough. Sprinkle with walnuts, pecans or raisins if desired.

Beginning at the 15 inch side, roll up dough until it forms a long roll. Cut into 12-15 slices. Usually about 1 inch thick. I cut rolled up dough with a serrated knife. If you cut it in half and work down the roll from the middle it can make it easier. 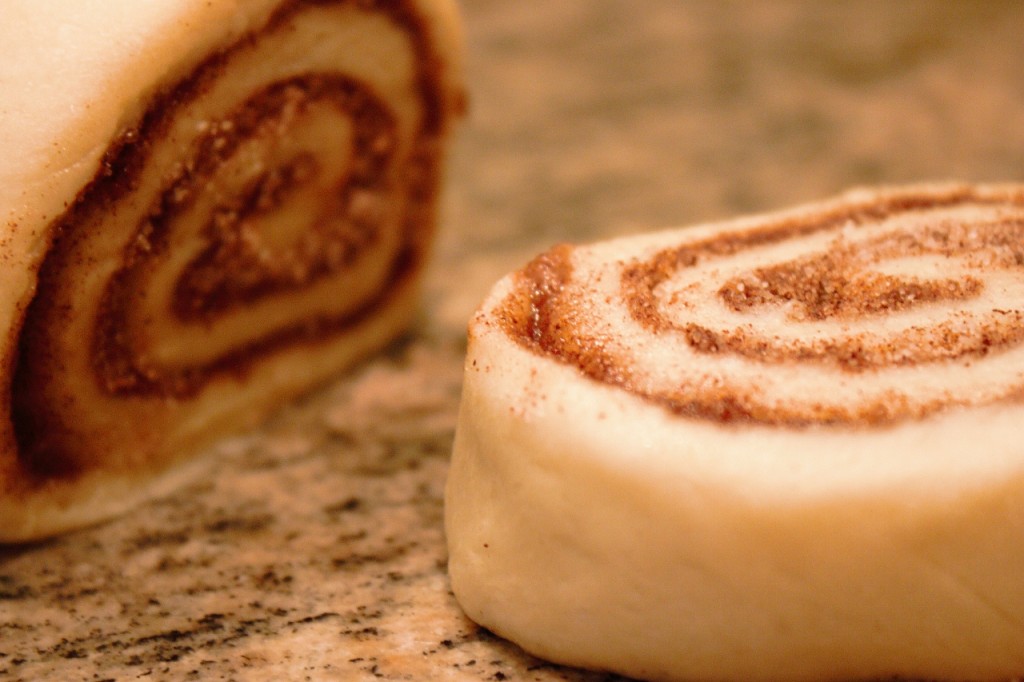 Place cinnamon roll slices close together in the pan. 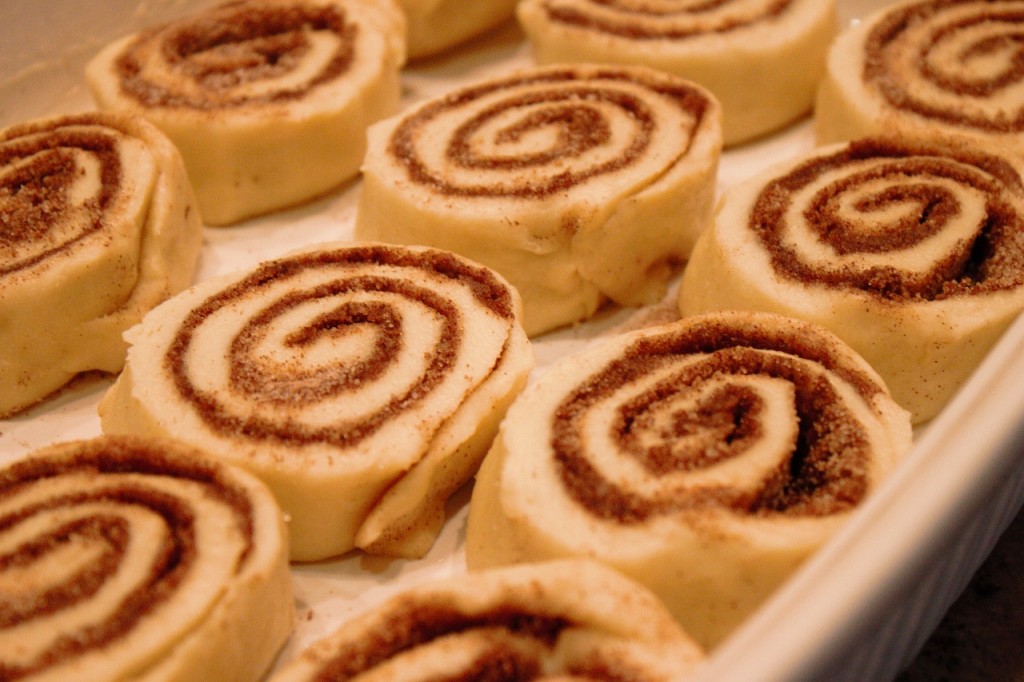 At this point, I reheat the oven to 200 degrees. When it is ready, I put the pan in the oven with the dishtowel and turn the oven off again. Leave in the oven for 45 minutes. This will allow it to rise until it has doubled again. Pull out of oven and preheat oven to 350 degrees.

Now that the dough has risen, place the uncovered pan back in the oven and bake for 28 minutes. 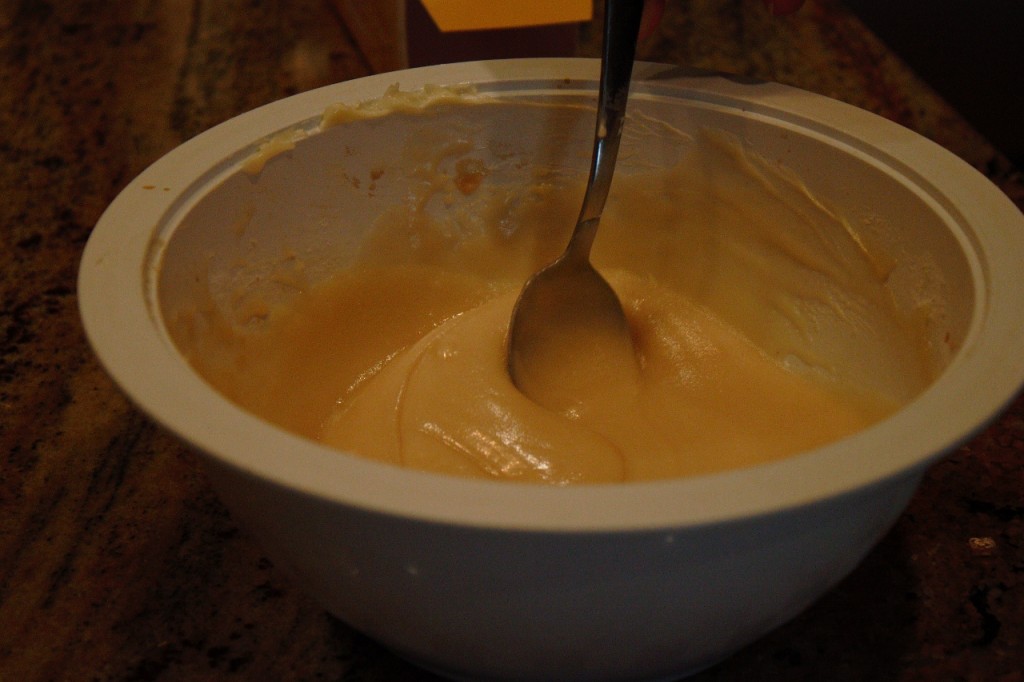 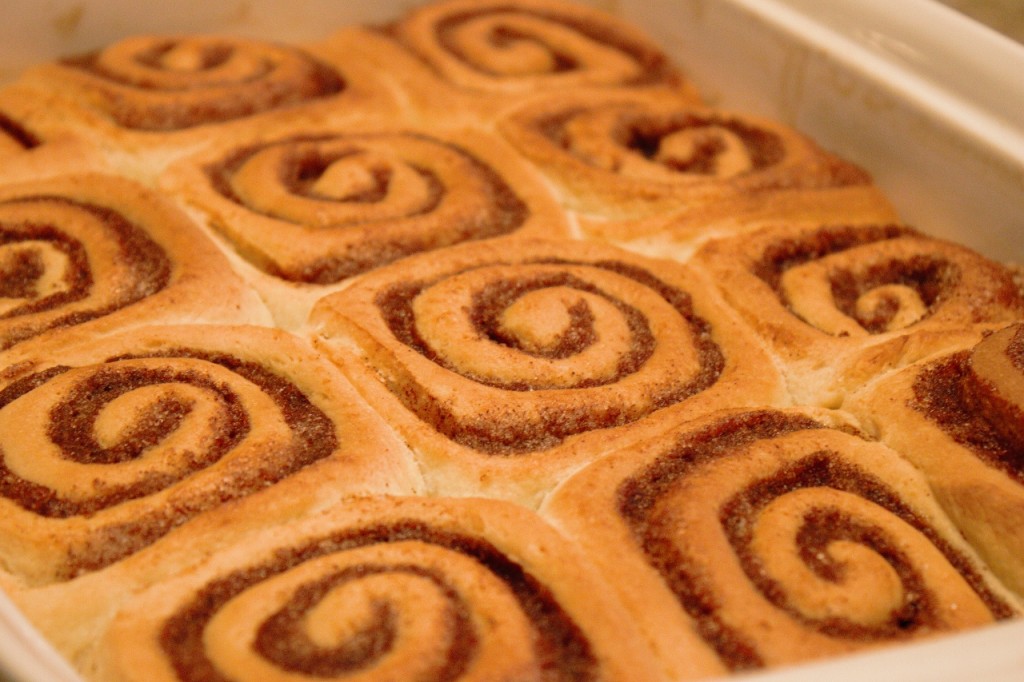 Pour and spread glaze ALL OVER! 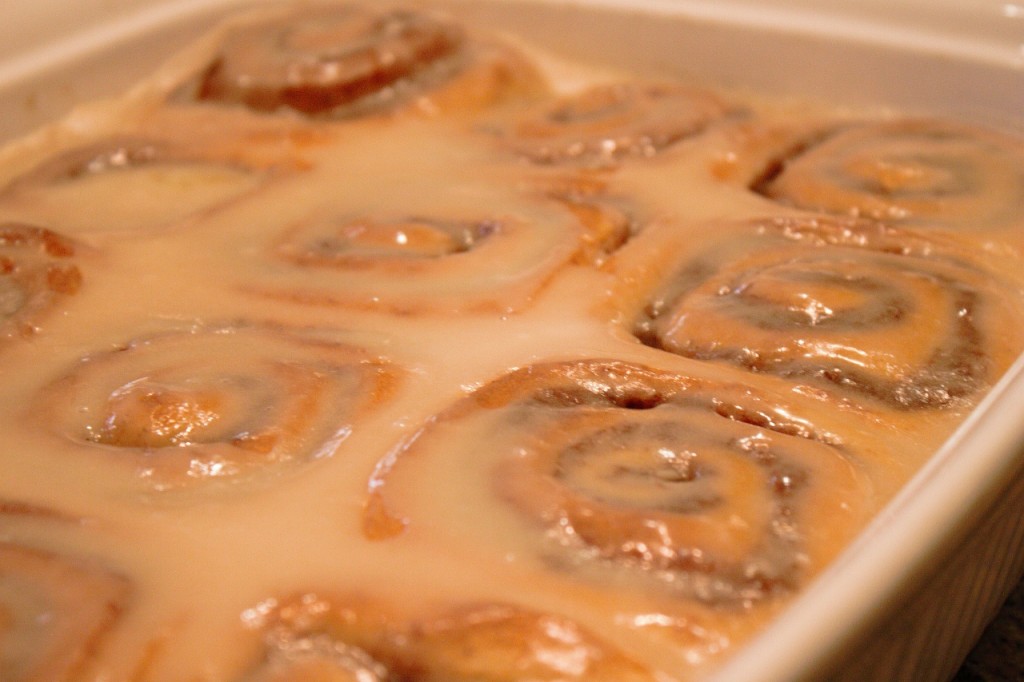 After only a couple of minutes the glaze will seep in, dry up a little and the cinnamon buns will be ready to cut into and enjoy! 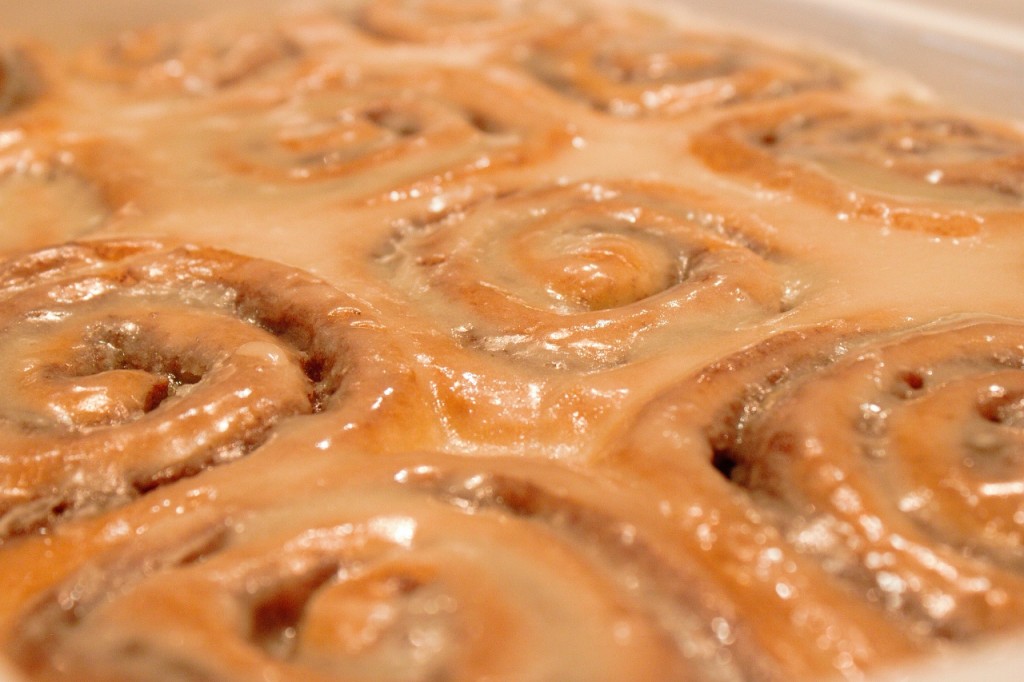 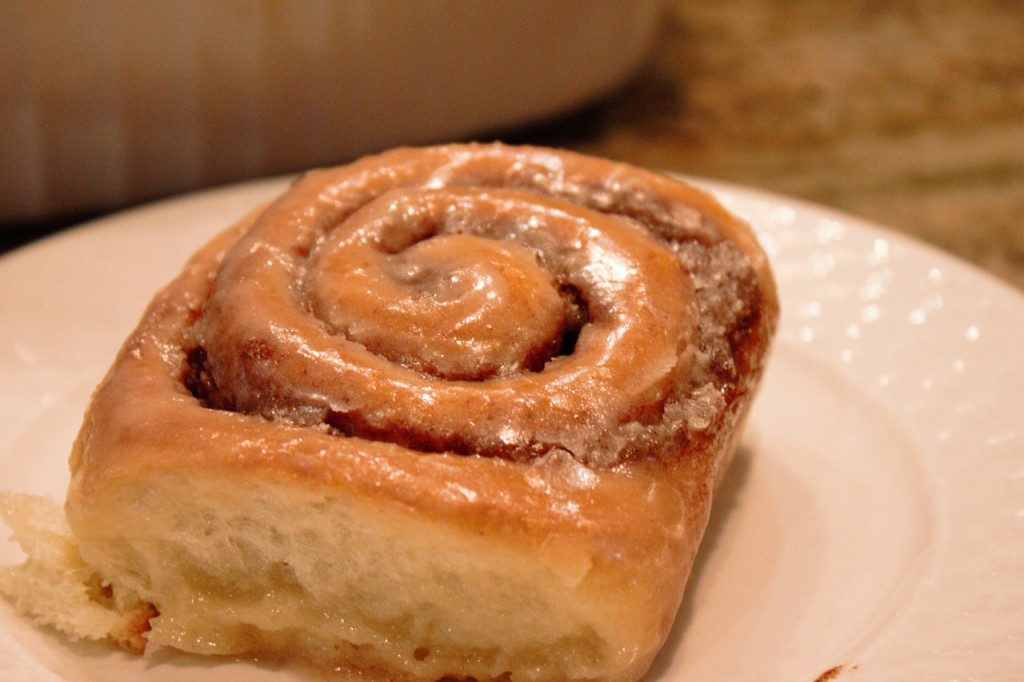