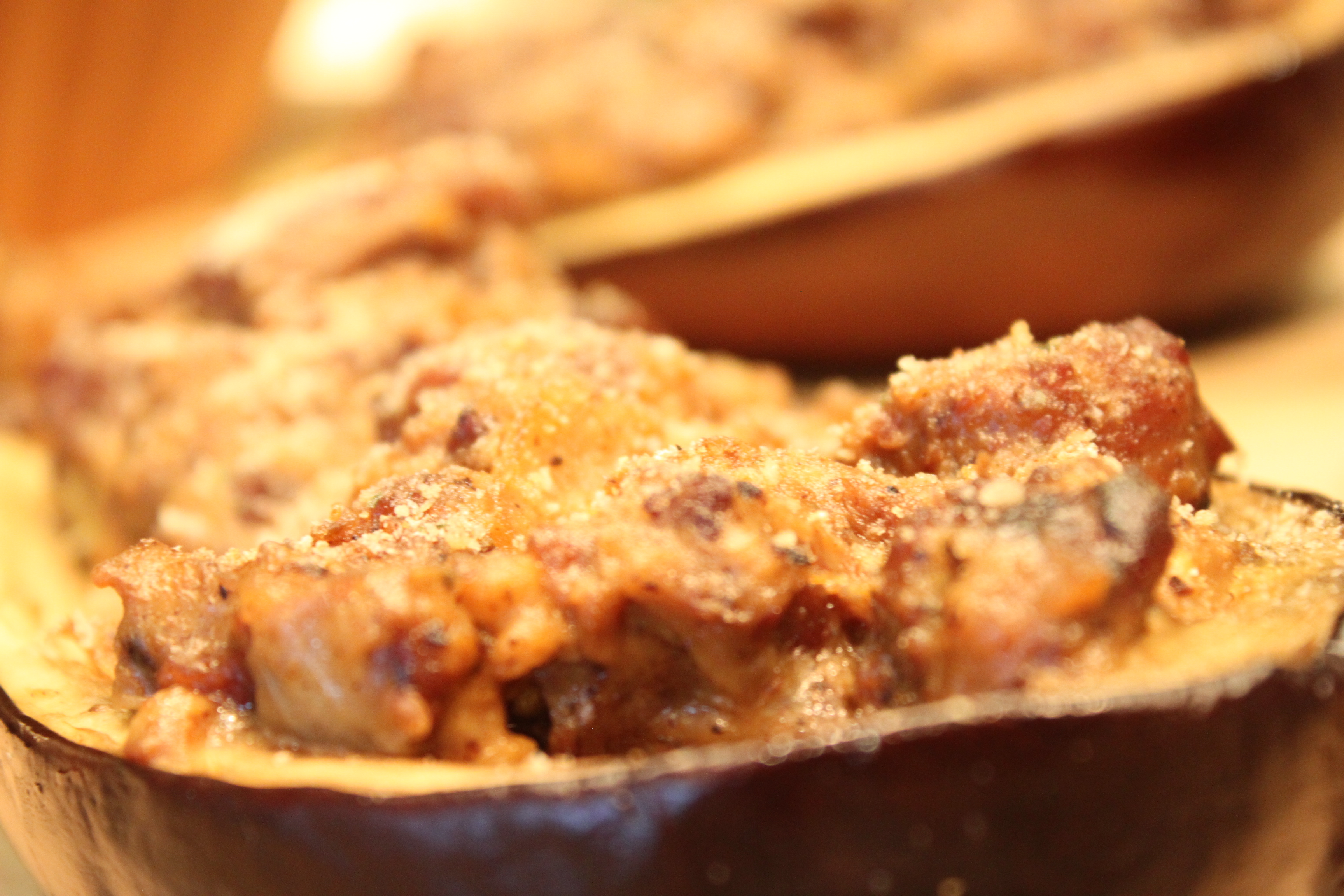 Eggplant is the star of this week’s Summerfest party! My hubby and son Alexander are not huge fans of eggplant, but my son Nathaniel and I are. Before making this recipe for stuffed eggplant, my husband Mike would enjoy my Eggplant Stuffing only.

I traditionally make eggplant stuffing for our Christmas Eve or New Years Eve gatherings at our home and everyone loves it. It’s filled with shrimp, crab meat, onions, celery, peppers, garlic and much more!

That was the only dish featuring eggplant my hubby really liked until I made stuffed eggplant that tastes like moussaka, a Greek dish filled with beef, eggplant and a creamy bechamel sauce!  Beef can be substituted for the Italian sausage I used here. 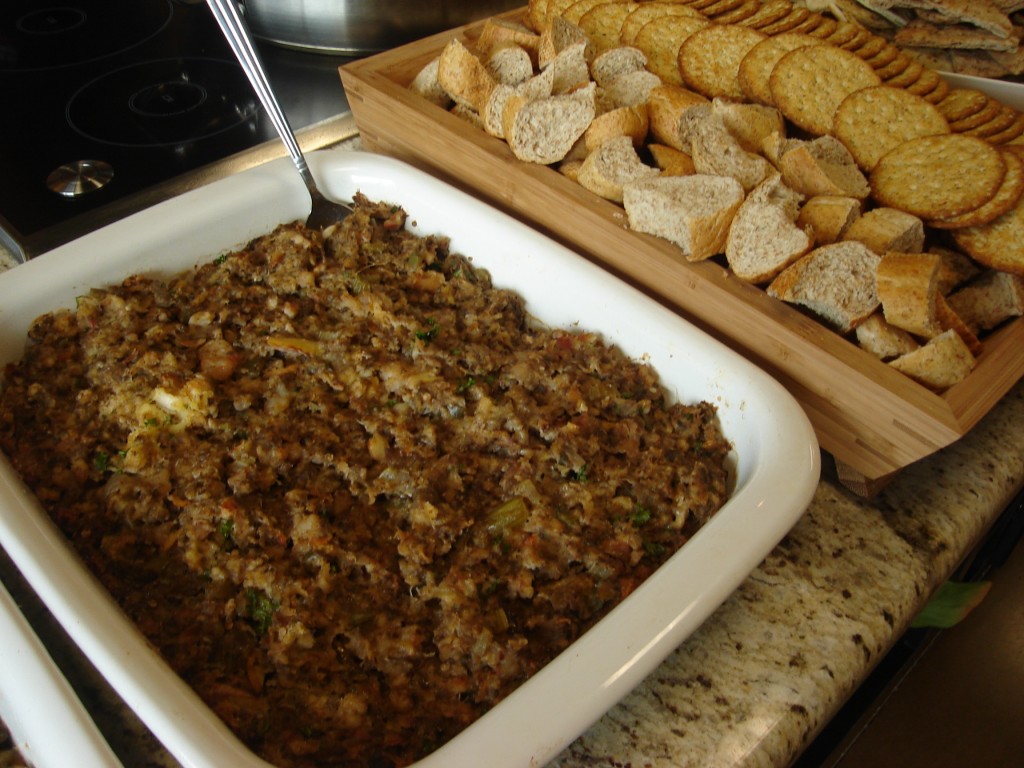 Preheat your oven to 350 degrees F.

Cut your eggplants in half lengthwise and scoop out the soft pulp from each half. Be sure to leave a shell of about 1/2-inch. Reserve the pulp. Place your eggplants on  baking sheet, brush with a little olive oil and bake until soft, about 20 minutes.

Meanwhile, chop the eggplant pulp coarsely. In a frying pan over high heat, warm 3 tablespoons of the olive oil. Add your ground Italian sausage and saute until browned, about 8 to 10 minutes. Add the onion, garlic, and eggplant and saute until softened, about 3 to 4 minutes. Stir in the wine and cinnamon and cook until all of the liquid has been absorbed, about 5 minutes. Remove from the heat.

Make a small batch of bechamel sauce. In a small saucepan over low heat, warm the remaining two tablespoons of olive oil. Add the flour and stir about 2 minutes. Do not allow the flour to brown. Add the milk and stir with a whisk until the sauce thickens, about 5 minutes. Season with nutmeg, salt and black pepper. Remove from the heat and fold into your sausage mixture.

Lightly beat one of the eggs and add it to the sausage mixture; mix well. Taste and adjust the seasonings. Oil a baking sheet in which the eggplant shells will comfortably fit in a single layer. Spoon the sausage mixture into the shells, dividing it evenly. Beat the remaining egg and spoon it over the tops of the filled eggplants, then sprinkle with the bread crumbs.

Bake until golden brown on top, about 20 minutes. Serve immediately. 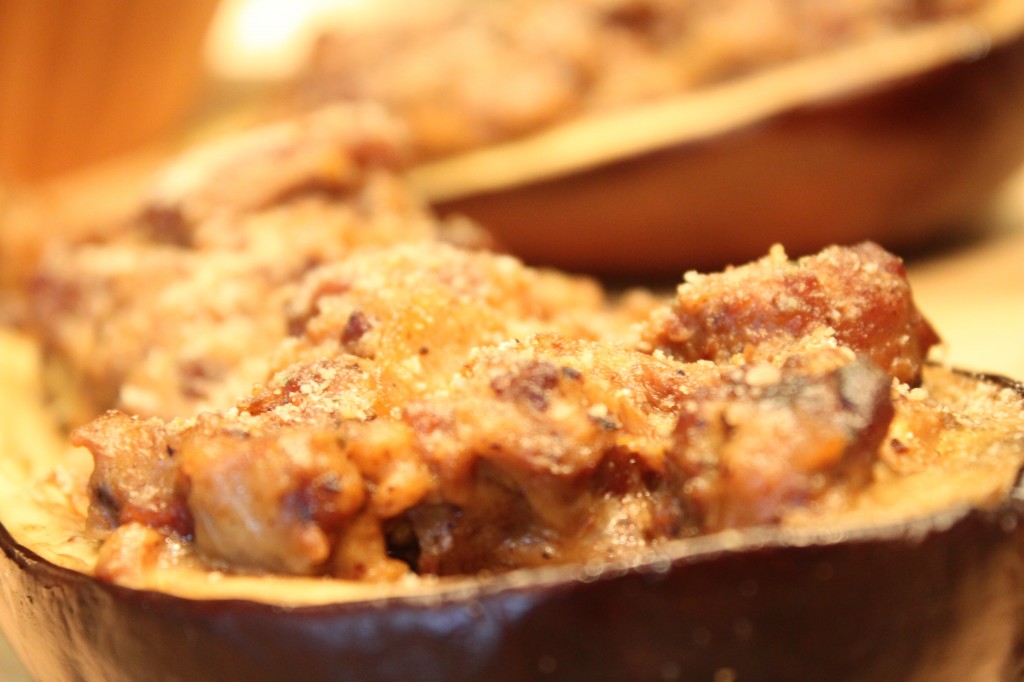 Craving more eggplant recipes? Be sure to visit my other Summerfest pals to see what they’ve cooked up for you! You can join the conversation by tweeting about our eggplant recipes, pinning them onto your favorite board, or sharing with your friends and family on facebook!