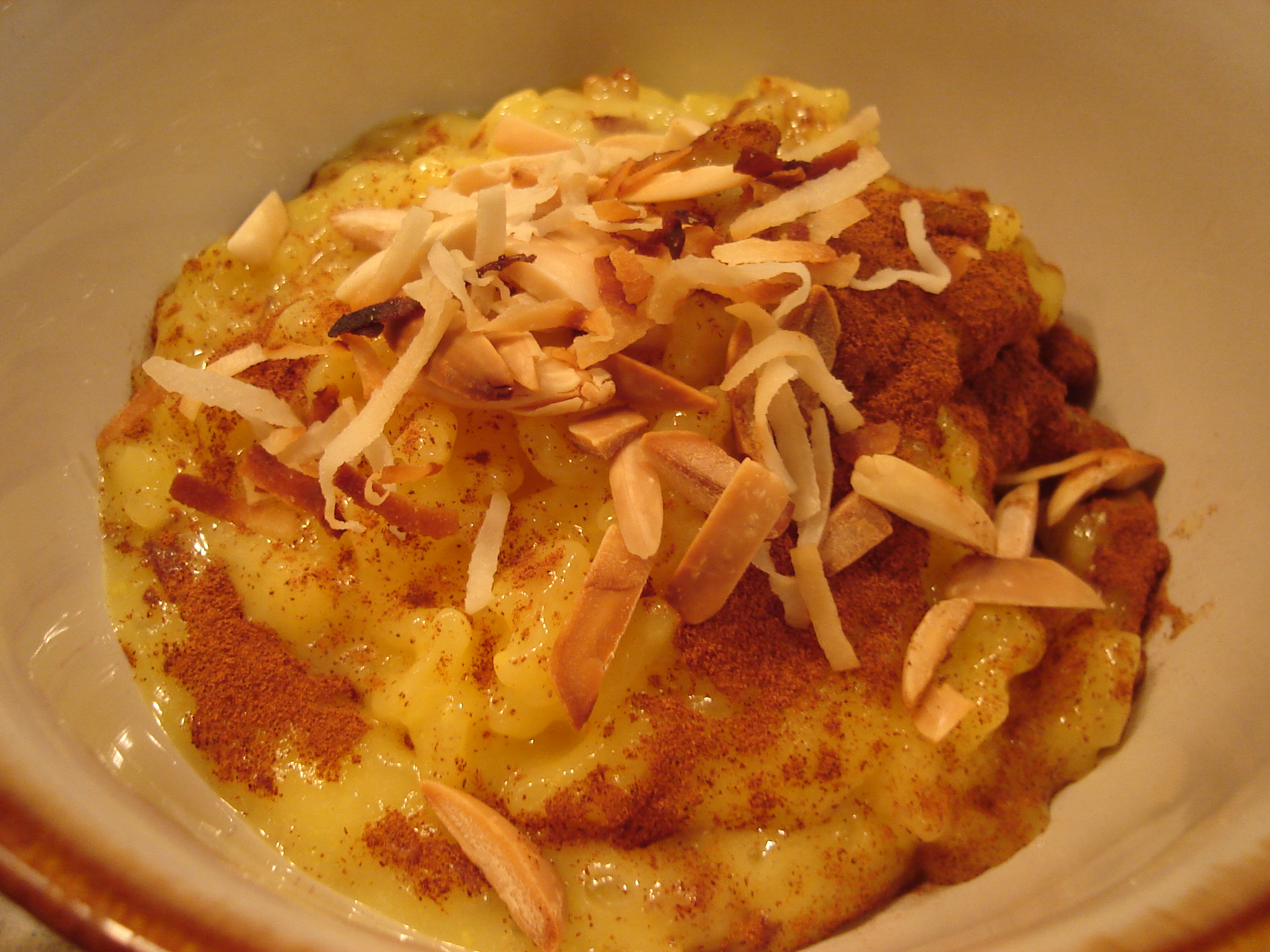 One of my favorite desserts made by my grandmother was her Rice Pudding. I could smell it a mile away. Like her Massa or Portuguese Sweet Bread, it took me quite a while to replicate her recipe.  My grandmother did not use saffron in her Rice Pudding, she simply dusted it with ground cinnamon. Her Rice Pudding the best Rice Pudding I’ve ever had.  Just for a little change, I tried adding saffron and toasted coconut and almond slivers for texture. I think she would have been proud and would have loved it!

In a saucepan combine rice, water, lemon peel, saffron threads and salt. Cook over a med/low heat until the Arborio rice absorbs the water. Leave a little bit of a bite, because the rice will continue to soften in the milk later on.

In a bowl combine sugar and egg yolks. Mix well; set aside for later.

Scald milk in a large saucepan with cinnamon sticks. When the rice is cooked, add it to the milk.  Cook for about 5 minutes until thickened and bubbly. Remove cinnamon sticks. Take a little of the milk and mix in with the egg yolk/sugar mixture to bring egg yolks up to temperature so that you don’t end up with scrambled eggs!

Add sugar/egg yolk mixture to rice and milk mixture and stir well. Leave over heat for about 6-8 minutes; stirring regularly. It will be creamy, but not too thick. Pour into a buttered 9 x 13-inch baking pan. Sprinkle ground cinnamon liberally over the top. Mixture thickens as it sets in refrigerator. Garnish with toasted coconut and slivered almonds if you’d like. It adds a lovely flavor and texture to the rice. Enjoy!

My grandmother loved to use Uncle Bens Rice, but I use Arborio rice, which is the short grain rice typically used to make risotto. I have also seen this made with Basmati Rice. Try them all and see which one you like!

My grandmother would also the peel of a lemon and not zest. She’d leave the lemon peel in the rice. After the rice had been chilled we’d all be called downstairs to enjoy it. One lucky family member or friend would find the lemon peel in his/her pudding and then we’d all fight to suck on it – it tasted wonderful!  Because I love lemon so much, I zest the whole lemon, but I do miss finding the lemon peel! Great memories!