The wonderful world of custards: Flan vs. Creme Brulee

By Elise, August 25, 2010, In Uncategorized
Home » Uncategorized » The wonderful world of custards: Flan vs. Creme Brulee 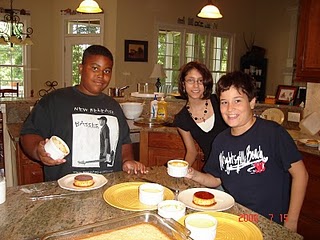 The history of pudding is a deliciously dense subject. Throughout history, many different types of foods have been known by this name. The creamy, rich pudding we Americans think of today is more closely related to custard.  People all over the world have been making pudding, particularly custard, since the ancient of days. Food historians generally agree that custard, the sweet almost pudding-like substance we Americans know today, dates to the Middle ages.

Who discovered pudding? Ancient Romans recognized the binding properties of eggs. Experts at creating several egg-based dishes, most notably patinae, crustades and omlettes, the Romans,  fell upon a discovery that would in my opinion, change the world..hey, I love puling!  this incredible dessert!  The Romans enjoyed experimenting with savory versions made with cheese, meat, pepper etc. or sweet  recipes flavored with honey, nuts, cinnamon etc.  At that time custard was eaten alone or used as fillings for pies, tarts, pastry, etc. Flan is probably the most famous and widely adapted custard  in the world. It is important to note that custard was not unique to Europe. Similar recipes flourished throughout Asia.

If you’ve ever had the good fortune of enjoying the French dessert, Creme Brulee, you’ll really enjoy Spain’s version as well!

“Flan” is the Spanish name for a vanilla egg custard, topped with caramel sauce. It is a Spanish classic and one of the most popular desserts served all over in Spain. Flan makes a great finish to any meal because even though it is sweet, it is a light dessert. Because it is made in ramekins or a baking dish and not removed until it’s time to eat, it “travels” well in an ice chest. Just cover tightly with plastic wrap while en route and un-mold when ready to serve!

These are my two of my favorite recipes for Flan and Creme Brulee!  Be sure to try these recipes and get ready to experience pure joy!

Boil milk with lemon peel and cinnamon stick. Lightly beat eggs with wire whisk. Blend in sugar, vanilla, and salt. Add milk gradually; strain. Pour into ovenproof ramekins filled with caramelized sugar. Place cups in a pan of hot water two inches deep, and bake in a 300* oven for 1 hour. Remove and cool in the refrigerator.

To serve, un-mold custard by running a butter knife around the edges and turn upside down onto serving plate. ENJOY!

Both the flan and Creme Brulee are baked ina water bath. unlike the flan, Creme Brulee is not inverted, but instead granulated sugar is sprinkled on top of teh custard once removed from teh oven adn then either placed bake in teh oven to broil for a minute or so or cooked using a blowtorch!

Zest of one orange

Sugar to be used at the end

Put the egg, egg yolks, and 1/2 c. sugar into a large mixing bowl. Mix until the sugar is completely dissolved.

Place ramekins in a 9 x 13-in baking pan filled with boiling water halfway up the sides of the ramekins. Make sure to not get any water into the dishes. Bake for 35 minutes or until the custard is set when gently shaken.

Remove the ramekins from the pan and let cool. Refrigerate until firm.

Just before serving, sprinkle 1 tbsp. of sugar on top and heat with a blowtorch until sugar caramelizes.

Crème Brulee can be made in advance of up to three days. Using a kitchen torch, or a broiler, caramelize the tops just before serving.

Variations: I use different types of extracts and sometimes place a few fresh berries in the bottom of the ramekin before pouring the Creme Brulee batter. If I use raspberries, I’ll choose a raspberry liquor, etc.

2 Comments on "The wonderful world of custards: Flan vs. Creme Brulee"