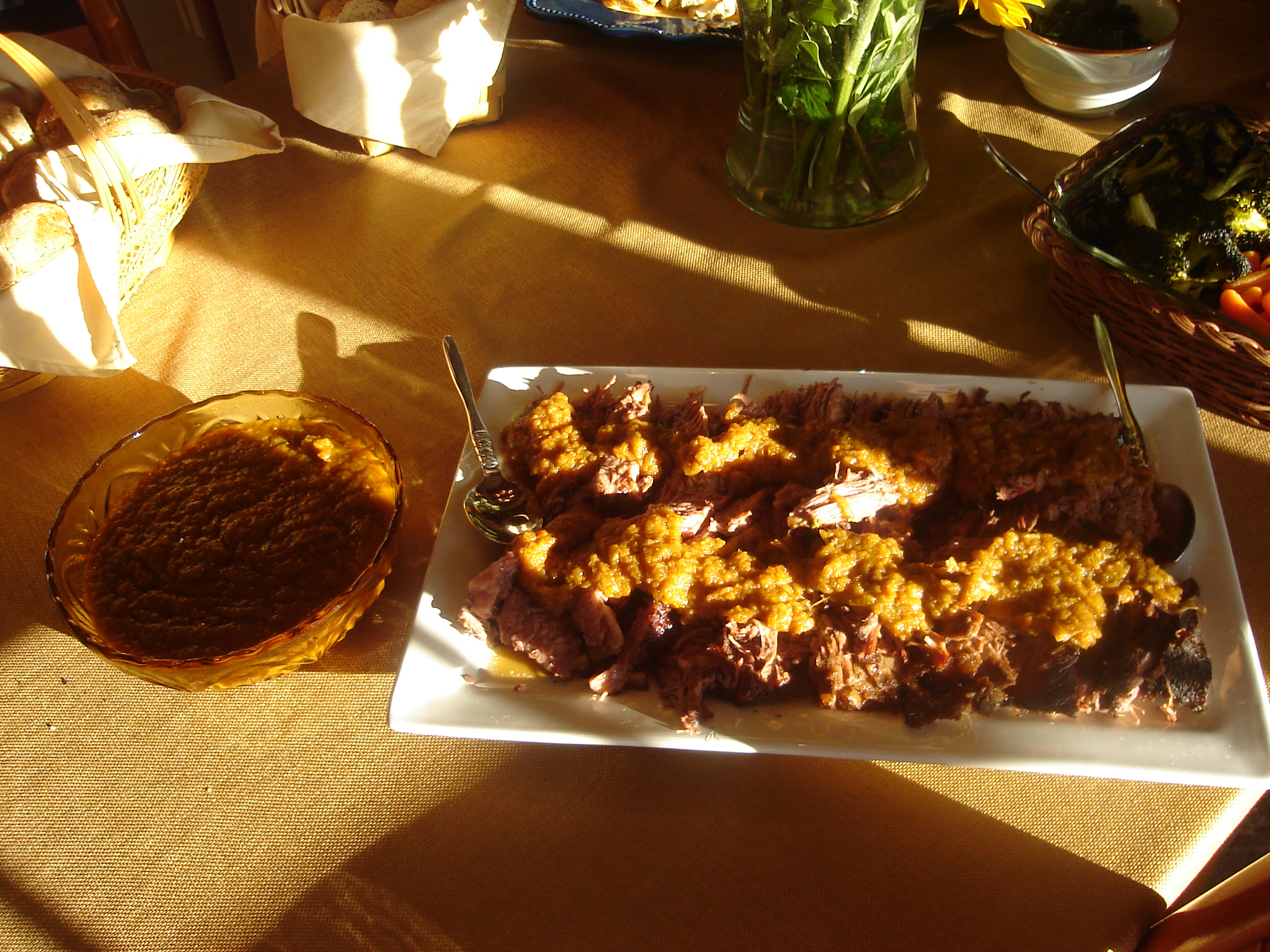 What could be better than a slo- cooked beef brisket with a thick and tasty sauce on a Sunday afternoon? This brisket turned out to be amazing! This requires very little preparation; you do need to let it do its thing in the oven. Always trying to optimize flavors, I used the roasted vegetables to make an incredible sauce…it was unbelievably delicious and because of the beautiful marbleized brisket, it simply melted in our mouths!

The loin yields the most tender and expensive cuts of beef like prime rib, filet mignon, and Porterhouse steaks, but these are certainly not the most flavorful and they are quite expensive.  These cuts of beef are great for small gatherings of two to four people. Steak lovers think it to be sacrilegious to marinate or do much to these cuts of beef.  I like to marinate things, get the biggest bang for my buck, so I love beef brisket. What is brisket? Brisket is a cut of beef taken from the breast section beneath the first five ribs, behind the foreshank.   A full sized Beef Brisket, may weight between 8 and 12 pounds, and is typically cut into two halves to make it easier to sell. One half is known as the Flat Cut or first cut and the other is referred to as a Point Cut or second cut. The Flat Cut, which may also be called the thin cut or brisket-deckel-off, is the cut most often sold as a brisket. It is leaner than the Point Cut of the Brisket. Despite being leaner, the Flat Cut does have a full layer of fat that runs across the surface of the cut, which helps the cut to remain moist when cooked. It is also the cut best chosen for making corned beef, which is processed from the Beef Brisket. The Point Cut on the Beef Brisket, which may be called the thick cut or deckel, contains significantly more internal fat running throughout the meat as pockets of fat. It is not a cut that is commonly found in many meat markets or food stores. The fat in both of these cuts helps to moisten the meat when the cuts are pot roasted, slow cooked or prepared as a London broil. When purchasing either the Point Cut or the Flat Cut, select or request pieces that have a fair amount of fat to keep the meat moist when cooking, since some butchers often trim the fat prior to selling the cut.

I beg of you! Please make this for your family! Here’s how I did it:

In a bowl mix together salt, pepper, garlic, oregano and thyme. Place your brisket in large roasting pan. Rub spice mixture all over the meat and massage throughout, even under the flap, here you will find a nice pocket of fat which will help flavor your meat while cooking.

In another bowl make the marinade combing soy sauce, chili sauce, Worcestershire, pepper, parsley, oregano and dry mustard. Pour over the brisket and rub all over.

Place all of the vegetables on top and around the brisket. Pour enough beef stock into the roasting pan to cover the brisket about halfway up.

Cover with lid or foil and bake in a 350 degree oven for about 5 hours or until meat is tender.

Remove the brisket onto a cutting board and tent with a piece of foil. Allow to sit a few minutes while you make the sauce.

Using a slotted spoon, place all of the cooked vegetables (the carrots, onions and celery) into a food processor or use a hand blender like Cuisinart’s Smart Stick Hand Blender. Puree all of the vegetables and reserve in a pan for sauce.

When ready to serve, cut the brisket against the grain and serve the thick vegetable gravy on top. Enjoy!